We walked out of the hospital emptyhanded.

In December 2010, we discovered that our son Carter had never developed kidneysΓÇöa diagnosis that at the time offered zero hope of survival. His tiny body would not be able to sustain life after birth. We were devastated, but pregnancy became our time with him. For seven weeks, we wrestled with our grief, enjoyed his every flutter, and did our best to prepare for his arrival. The doctors told us not to expect him to live long.

A violent snowstorm hit the Midwest on February 1. Snow and ice made road travel nearly impossible. The terrain was a blanket of white in every direction. Skeleton trees slouched beneath layers of ice. And of course, although we were still five weeks away from my due date, Carter decided it was time.

After a long labor, we had one beautiful hour with our son. By GodΓÇÖs hand, our families and a few close friends braved the winter storm and made it to the hospital in time. Our pastor even ran two blocks, snow and ice up past his ankles, so we could dedicate Carter to God.

GodΓÇÖs presence was so thick I looked for Him standing amongst us.

The atmosphere in that hospital room was sacred. GodΓÇÖs presence was so thick I looked for Him standing amongst us. After experiencing more love than what many know in a lifetime, Carter passed quietly from the arms of his earthly father to those of his heavenly Father. That hospital room became holy ground.

But we couldnΓÇÖt stay there forever.

I was unprepared for the void I felt in the months after we buried our son. I physically ached for his presence. My arms hung hallow, empty in the spaces where newborns nuzzle. My body, wanting to nourish my infant son, hurt like shards of glass, a constant and excruciating physical reminder of the pain only amplified in my heart. Our home was full of ΓÇ£should-have-beensΓÇ¥ΓÇöunfulfilled dreams of where Carter should have lived and breathed and played with his older brother, fitting seamlessly into our family.

In my darkest days, I found myself begging God to alleviate the pain. I even had my husband hide the pain killers so I wouldnΓÇÖt be tempted to self-medicate, just to escape the grief for a few hours. Instead, I threw myself at God. Not because I was righteous. Not because I was brave. But because I had no other option. I remember sitting in the hospital, telling God, ΓÇ£You either have to be everything you say you are, or I am done.ΓÇ¥ It was not so much an ultimatum as it was desperation.

The daily act of stepping forwardΓÇöone raw foot in front of the otherΓÇöbecame what I knew to be faith. And God met me there. I was not enoughΓÇöbut He was. And the more I leaned into Him with my pain, the more I discovered His abundant presence.

Faith didnΓÇÖt feel how I expectedΓÇöconfident, strong, and full of optimism. In the wake of my deepest fears come to life, I felt less like a rock and more like rubble. The daily act of stepping forwardΓÇöone raw foot in front of the otherΓÇöbecame what I knew to be faith. And God met me there. I was not enoughΓÇöbut He was. And the more I leaned into Him with my pain, the more I discovered His abundant presence.

He came to me in the loving notes from our church family or in the chicken casserole, delivered by a kindhearted neighbor fresh out of the oven. I felt His presence, like cool breeze in the throes of August heat, every time a laugh escaped my lips. Oh, how it soothed my soul to laugh.

Redemption came slowly, these small moments of love that over time became an ocean of grace and healing. By plunging into Him, my pain found comfort in His presence. Although grief was constant, I discovered an intimacy with God I didnΓÇÖt know possible. I found that I can have both empty hands and a full heart.

Even today, I would do about anything to know Carter in this life. But I also know I would not see God the same without the suffering. God used grief to change me. As a woman naturally burdened by fear and discontentment, I discovered God to be enough. His abundant love didnΓÇÖt just patch my brokenness but filled my soul to overflowing. Over the last eight years, He has shown me again and again the beauty of his redemption.

In Him, grief has become my deepest grace.

October is Pregnancy and Infant Loss Awareness Month. I dedicate this post to the women and families experiencing the unique and devastating grief of coming home empty handed. My deepest prayer is that you will know GodΓÇÖs abundant love personallyΓÇöthat His ΓÇ£enoughnessΓÇ¥ will seep into the marrow of your bones and that you will experience His goodness even in the midst of grief.

On Letting Go: An Easter Reflection for Parents – Sarah Westfall 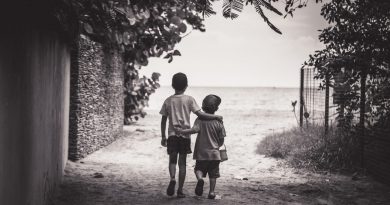