We were in the middle of New York City, just blocks away from Times Square. My husband Ben and I had been trying to pick a restaurant and failing. I wanted Mexican food; he wanted ramen. Typical.

But what started off as banter soon turned to bickering. The bickering then escalated into loud talking. (I mean LOUD.) Before I knew it, there we were on the street, arguing so adamantly that people passing by openly stared.

Ben and I donΓÇÖt fight often. And when we do, itΓÇÖs never in public. We typically save such disagreements for when we are alone. In our home. After kids are in bed.

But there we wereΓÇömaking even these gritty New Yorkers squirm.

To be honest, I didnΓÇÖt care. I knew IΓÇÖd never see those people again, and I was done trying to bottle my angst one second longer.

Ben and I’s communication ΓÇö which had been a bedrock of our 17-year relationship ΓÇö had become limited to the need-to-know essentials, mostly to keep our kids afloat.

For several months, we had been living hectic lives. With four kids and new jobs and an uncharacteristically busy season of travel for Ben, we had been doing more ΓÇ£passing offΓÇ¥ than actual interacting. Our communicationΓÇöwhich had been a bedrock of our 17-year relationshipΓÇöhad become limited to the need-to-know essentials, mostly to keep our kids afloat.

Little did we know that we were the ones drowning.

ItΓÇÖs not that we didnΓÇÖt love each other. ItΓÇÖs not that we didnΓÇÖt want time together. But we had allowed the busyness of that season to interrupt our connectedness. We kept waiting for ΓÇ£somedayΓÇ¥ when things would slow down. Without even noticing, we began living like silosΓÇöstanding next to each other, but essentially doing our own thing.

The promise of New York City is what had been getting us through, a trip to celebrate the end of a frantic fall. While the majority of the trip was just thatΓÇöriding bicycles through Central Park, eating Bleaker Street Pizza, and seeing The Lion King on BroadwayΓÇöwe quickly realized something was boiling beneath the surface.

And it all came spilling out right there in Midtown.

Realizing that this talk was going to take a while, we ducked into the nearest pub. The food was mediocre, and the waitress was clearly uncomfortable every time she came to the table. IΓÇÖm not a pretty crier, and we were clearly having a tough conversation. The poor girl. By the end of the night, IΓÇÖm pretty sure she and the bartender were taking bets on what in the world was happening with that couple in the corner. (DonΓÇÖt worryΓÇöwe tipped her well.)

Hand in hand, we stepped out of the pub exhausted but finally, really, truly seeing each other in a way we hadnΓÇÖt for a while. The street air never seemed so light and fresh.

Ben and I stayed there for hours, agreeing not to leave until we had worked things out. Hand in hand, we stepped out of the pub exhausted but finally, really, truly seeing each other in a way we hadnΓÇÖt for a while. The street air never seemed so light and fresh.

We laugh now at our street fightΓÇöso unbelievably uncharacteristic of us both. But what a beautiful fight it turned out to be.

We came to NYC unable to see past our own needs. In the months leading up to our trip, we talked, but didnΓÇÖt connect. We traded schedules and navigated kid issues and collapsed beside each other on the couch after kids were in bed. But I canΓÇÖt think of one time we truly put down the phones, turned off the TV, looked each other in the eyes, and asked, ΓÇ£How are you doing, really?ΓÇ¥ We expected the benefits of commitment without putting in the work to connect.

In hindsight, I think, ΓÇ£Well, DUH. IΓÇÖve taken all these counseling courses, I probably should have seen that comingΓÇªΓÇ¥  Communication is kind of basic, right? But how easy it is to forget the basics in the day-to-day chaos, in the hurts and disappointmentsΓÇöin those moments that we expect each other to be less human than we actually are.

HereΓÇÖs the truth: A healthy, growing relationship ΓÇö especially with those closest to usΓÇödemand intentional, deep, authentic connection. A relationship require space for vulnerability and authenticity and confession and acceptance, an extension of all the beautiful things God abundantly offers us.

But we canΓÇÖt do it alone. Not without each other and certainly not without Him.

Because we can know all the things and be committed and tell ourselves weΓÇÖd never fight in public like those people, but when we try to muscle through on our own, weΓÇÖre only setting ourselves up for failure. Two flawed people donΓÇÖt make a perfect partnership. Sooner or later, one or both of us are going to turn those arrows inward, shut out, and shut down.

Left to our own devices, we are not enough to sustain love that ΓÇ£always protects, always trusts, always perseveres.ΓÇ¥ Who can truly say that their love has never failed?

DonΓÇÖt let love become a distant memory. DonΓÇÖt settle for isolation. Connectedness is worth the struggle.

We need to battle for love, and we need Him in it with us. Whether youΓÇÖre married or single or engaged or divorced, whether your relationship with the people in your church is committed or complicated, whether you get along with your neighbors or havenΓÇÖt peaked over the fence to say hey, donΓÇÖt let love become a distant memory. DonΓÇÖt settle for isolation. Connectedness is worth the struggle.

ItΓÇÖs going to be messy. People might stare. But loving each other well is worth the fight. 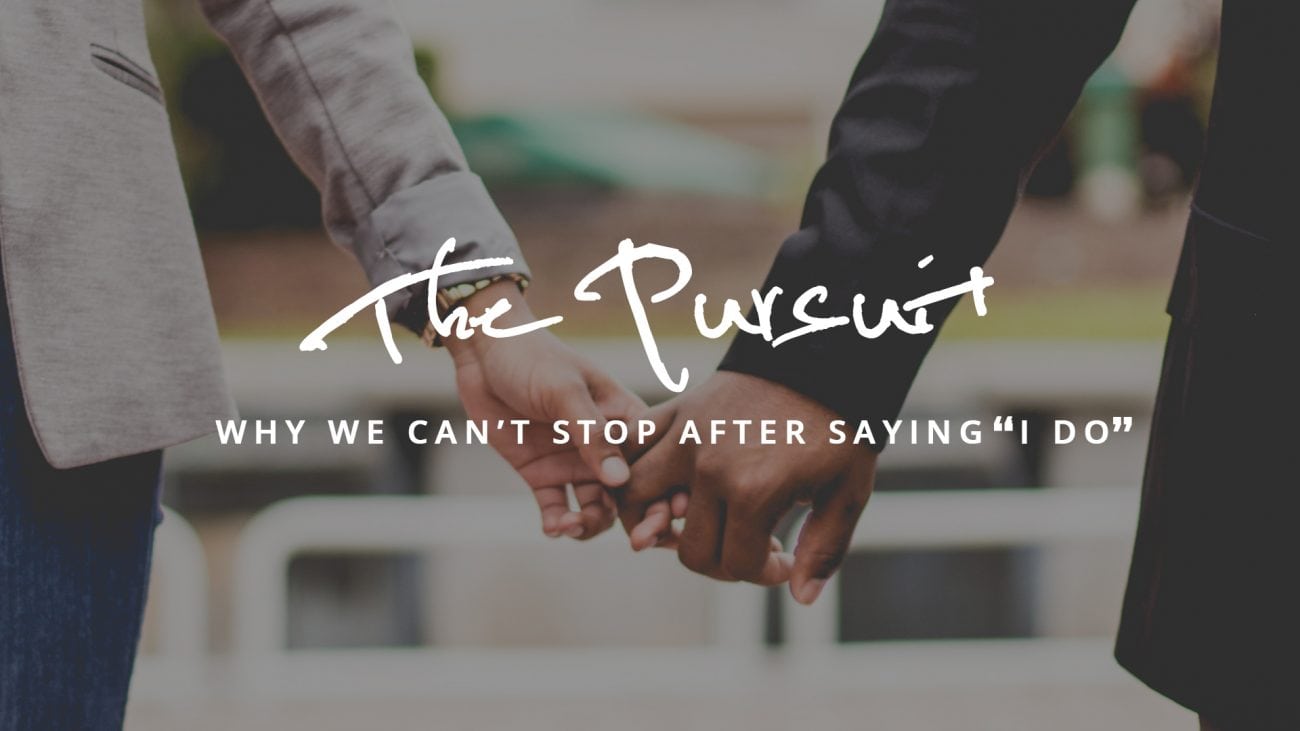 The Pursuit: Why We Can’t Stop After Saying – Sarah Westfall

On Letting Go: An Easter Reflection for Parents – Sarah Westfall